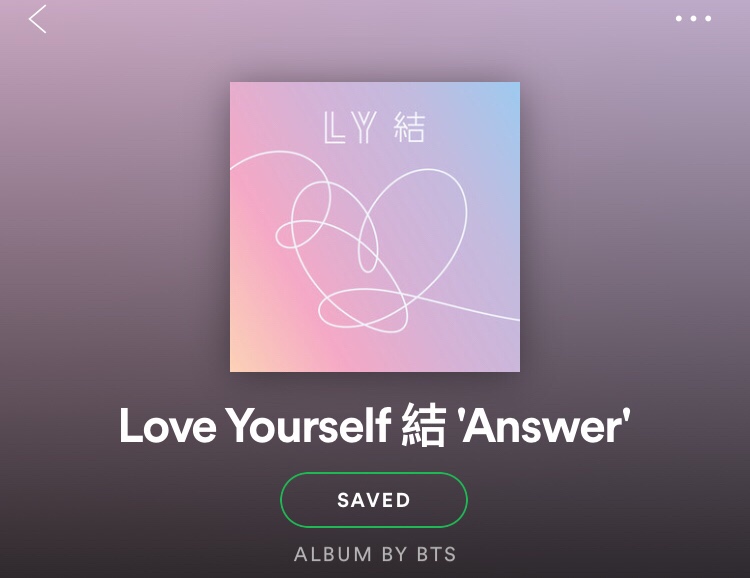 Before I give you my thoughts, I’d just like to clarify that I’m writing this review because I said I would listen to this new release and I wanted to honour that, as I believe the overwhelmingly positive response from the ARMY to my recent blog post warrants it. While reading through your wonderful messages (some really emotional, touching comments), someone suggested to me that I had better be wary of looking like I was trying to use BTS as a means to forward to my own cause.

And I think that’s definitely worth a little consideration – I stumbled upon BTS and the ARMY completely by accident, and I hope you can see that from the sincerity of my original piece. I do not wish to profit from your love for the band. I’m really glad I’ve become aware of the great work they’re doing (and of course the music), but for me this is still your thing. They are your band. I have my own things musically and otherwise which I really love and I don’t want anyone to think I am trying to use BTS (or you guys) just to help me get a few more likes. I really respect what you and the band are doing and I hope that seems genuine – because it is. My intention is to write a philosophy blog and that is what I’ll continue to do; only now, I’ve also got a bunch of new like-minded people with which to share philosophical ideas – and that’s great. The fact that it turns out that BTS’ music and ethos aligns with a lot of what my blog is exploring is a wonderful coincidence and I’m really grateful for all the nice things that ARMY members have said.

Anyway – back to the music!

I’ll do my best to review what I’ve experienced in a phenomenological way (the pure sounds), sometimes expanding into what I felt when listening, what the songs remind me of, make me think about, and any other relevant points I think are worth mentioning. But mostly in a light-hearted way. I have looked into the lyrics for some of the old material thanks to @ItalianARMY_BTS among others and so already have a bit of an idea of the kind of topics that the band have covered previously.

@ItalianARMY_BTS directed me to a particular fave of theirs – Life – and I gave my thoughts on how the lyrics brought up ideas of Freud’s death drive Thanatos; the notion that the meaning of life is death; that we are all trying to return to the state of peace (inertia) that we first had with our mothers as infants when we were unaware of the symbolic realm (the signs and symbols which constitute the world around us – language, culture, etc). Freud beautifully equated it to the salmon who swim back upstream to die in the place where they were born – we are all looking to return to this place where we began; to be at peace – where we are no longer conflicted, constrained and enslaved by our desires. I also listened to Love Yourself Tear on the way home from work last night – big fan of the loungey, flute/jazz guitar melty vibes on 134340 in particular.

As for Love Yourself ‘Answer’, with it apparently being a double album and featuring tracks old and new, I’ll just give a brief summary of the ones I liked the best. Anyway, here goes…

Nice pop tune to open up with – catchy and light. Definite single potential. Enjoyed the English language chorus hook “Are you the cause of my euphoria?” Seemed like it was like an immediate way of thanking their vast international fanbase for the “utopia” they’ve created. Had a kind of whale noise falsetto vibe which worked nicely with the driving synth. And any song which uses A Priori in the lyrics is right up my street – and yours! Because of course so much of this is about your theoretical deductions.

Fine falsetto work on this one – an airy ballad with some impressive vocal tricks on show. More of a classic boyband number – but nothing wrong with that! There is actually a strong scientific vibe behind the lyrics of this one linked to the founder of penicillin, Alexander Fleming. And talk of predestiny and the universe never fails in the romance stakes.

Proper catchy dancefloor-filling anthem. Felt like I wanted to be on a boat in the Med, swinging a bottle of fizz around in the blazing sunshine. Or a foam party in Ibiza.

My fave so far – loving that catchy chorus. “I want it anyway, anyway, anyway…” I actually started this one again while getting my lunch in the supermarket because I was enjoying the vibe. I could definitely see this one being enjoyed by UK audiences on our radio stations here. There’s something quite powerful about focussing on something like a dimple to describe a femme fatale – “that dimple is illegal. Dangerous. A mistake left by an angel.” Very evocative.

I instantly recalled listening to this track the night before on Tear. And I thought the same thing as I did then – it’s a brilliantly stripped back, cool, easy-listening song which would be quite a bold move for a more traditional boyband. It also feels more in touch with authentic Asian roots (I hope that’s okay to suggest). And I really liked that about it – it felt like a proper piece of sophisticated Korean pop; and consistent with the more-than-your-average boyband vibe I’d expected when discovering more about BTS. There seems to be an undercurrent of questioning one’s reality here – gazing into the reflection of that mirror of the surface of the cracked lake. Perhaps even thoughts of Jacques Lacan’s mirror phase of childhood development and entering the symbolic realm of which I spoke earlier. There’s a haunting quality to the lyrics – the powerful image of the lake freezing over you as you are trapped inside. Maybe it’s the feeling of being trapped in the symbolic realm of culture and yearning to return to the state of inertia in primordial infancy?

Very catchy chorus – and I like it when the bass and beat drop in at 1.28. I suspect this one is probably quite popular among the fanbase, but I think the band’s skill really comes across in the more gentle tracks like…

I’ve been intrigued by Steve Aoki ever since my colleague showed me an awesome video of him throwing a cake into the face of a wheelchair-bound fan (this is much nicer than it sounds – give it a watch online. The distance is incredible). Anyway, while I’m not a big fan of the autotuning, the soft “I still want you”, stripped back keys and subtlety of this track are really nice. And then when it goes full Westlife at 3.00 for the power finish (Westlife were known for jumping out of their stools for big key-change song-enders), it gives the track a rousing and fitting conclusion. I like this one so much it’s been given the special honour of winning a place on the exalted Joe’s Playlist!

The track which started this whole adventure! It’s certainly not Smells Like Teen Spirit! But it is a beautifully constructed ballad and will always be special to me after everything that has occurred in the past week. I can see many a school disco romance blossoming to this track, much in the same way as that wonderful Lord Huron track The Night We Met hits the spot in 13 Reasons Why. It’s got eyes-meeting-on-the-prom-dancefloor oozing from every note. The lyrics seem to be a call to the Love Yourself theme. “I wished to tailor myself to you” suggests that the BTS boys have realised that being something you’re not to please someone else is not helpful to either party. While the lyrics may come across as perhaps a bit selfish at a superficial level(?), I think it’s perhaps just a realisation that we all need to be happy with who we are. “I’m the one I should love”. We all need to give love to each other, yes of course. But make sure you appreciate how special you are, too.

It’s a decent club banger – and definitely benefits from Nicki Minaj’s presence on the second outing. But not so much my thing.

I didn’t instantly find anything particularly special about this song. Which I guess I was anticipating due to its title. Sorry!

Oh yes – I like the Iberian flavour of this one. Can definitely see some flamenco shapes on the floor with Airplane pt.2. My mother lives in the south of Spain and I could just picture myself drinking a nice glass of sangria and singing “Mariachi” on the terrace with this tune blaring in the Andalusian evening sun. Good times.

Like the previous track, this feels very ‘of the moment’. I don’t think it shows off the band at their best, but it’s the kind of chilled-out tune that would be the ideal backdrop for some Instagram stories of a bunch friends having a wacky day sight-seeing in Seoul. And who wouldn’t love that?

What a great chorus – I defy anyone to resist getting involved in that catchy sing-a-long. “Let me hear your say, let me hear you say…” I could just about make out Bangtan, but I wish I’d known the rest of the words because it was infectious. I expect that’ll be a good one to watch live at the tours.

Very interesting. Kind of has a grime mood going on at the beginning – before kicking into something more familiar, but still with that main minor key melody framing the song (which also has Asian overtures). I personally would’ve liked to end the album on the spectacular The Truth Untold, but that’s just my preference for the big, glorious finish.

So there you have it, my brief-ish review of BTS’ Love Yourself ‘Answer’. I hope it seems fair and sincerely done. Apologies if any bits offend anyone. I’ve done my best to be honest and try to evaluate it with both seriousness and a bit of fun. Thanks for reading. Enjoy the tours.

If Love Yourself is the Answer, then perhaps the question should be: what must you always remember to do? Because you’re all good people who are there for each other, and that’s very special.

To find out more about how I first became aware of the BTS ARMY, click here