It’s been a strange week for me on Twitter. I only signed up last month after years of avoiding it. I didn’t really fancy another social media commitment, knew I’d quickly become addicted to checking it and, having read Jon Ronson’s excellent book So You Been Publicly Shamed, didn’t fancy any potential hassles that might spring from an ill-judged or misinterpreted tweet. However, after setting up this philosophy blog (Being and Niceness), I thought a Twitter account might help to share my work, and I was keen to get the thoughts of like-minded people. And I have to admit, it’s proved a worthwhile decision – I’ve had some wonderful, positive comments on my work from various people, not just with a love for philosophy, but impressive qualifications and bodies of work, too. I like to tweet little portions of the things I read that make me think or smile, as well as my blog posts, and that works well enough for me. And, occasionally, I find myself trawling through the vast stream of content out there (some of it relevant, most of it cat pictures) and I’ll drop a silly comment or joke here or there.

More layers than meets the eye

I dropped one of those comments this week when looking through tweets about #NationalRelaxationDay. Here is it…

Despite the fact I use Twitter at work occasionally, I still consider myself a bit of a newbie and am not always entirely sure what I’m doing (or seeing). And on this occasion I thought I was looking at some kind of appreciation group for the brilliant satirical US media group The Onion. I saw the post above mention Nirvana and assumed that the music video attached to the tweet might be something by the (again brilliant) Washington grunge group – the joke being that Smells Like Teen Spirit is about as far away from relaxing as it gets. What unfolded was unexpected say the least.

It turned out that @TheOnionBTS (the clue clearly in the handle!) is a parody account for fans of the Korean pop group BTS; a boy band formed in 2013 which has a Twitter account with a head-spinning 15.8 million followers. It wasn’t long before my comment was swarmed upon by the ARMY (this is what the incredibly committed and passionate BTS fans call themselves). As I mentioned before, my account is very new, so it’s fair to say I’d never experienced what was to come next – which was basically an endless stream of notifications as ARMY members had a little laugh at my silliness and offered me explanations as to what I’d unwittingly wandered into. 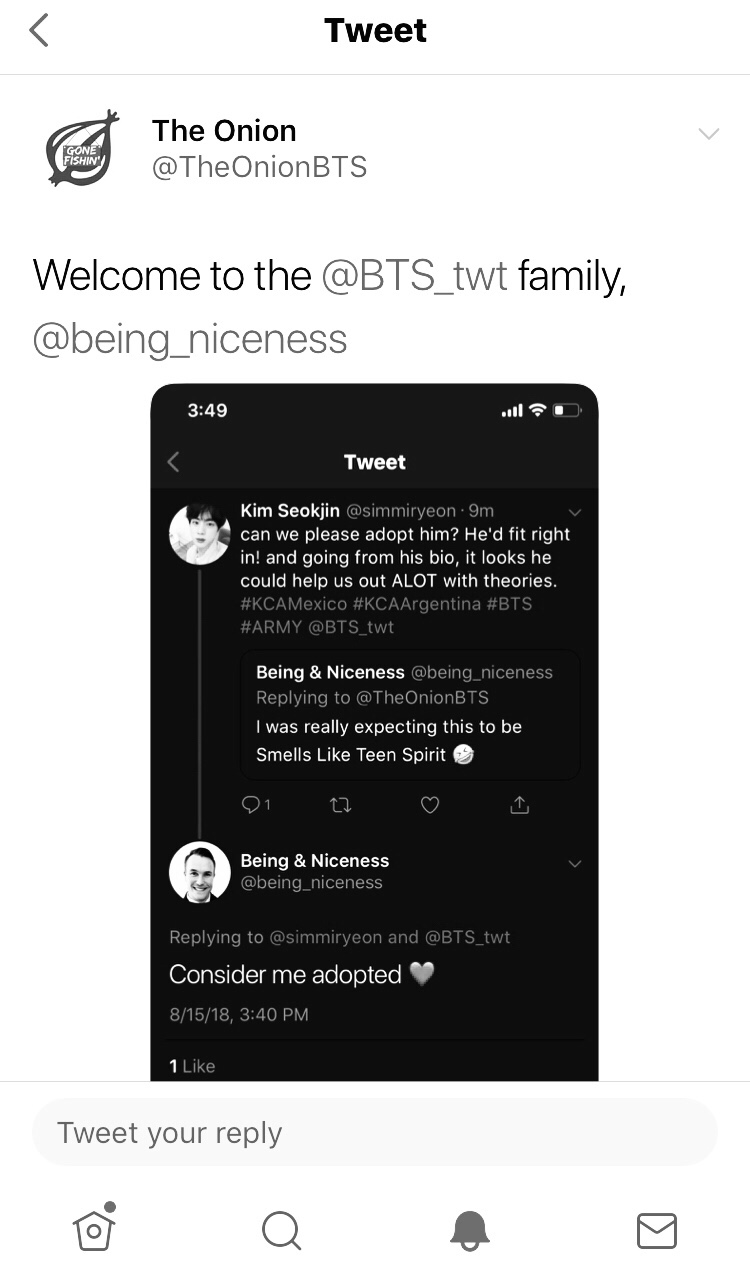 At the request of the BTS fans, I watched the video from the original tweet (BTS (방탄소년단) LOVE YOURSELF 結 Answer ‘Epiphany’ Comeback Trailer) and really enjoyed it. I then (foolishly) commented that I’d like to know what the message behind the lyrics was, as I didn’t speak Japanese. (By the way, I’m actually a football journalist, so I’m well aware of the difference between Ki Sung-Yueng and Shinji Kagawa, for example, so if I’d actually properly examined the text, I’m sure I would’ve realised it was Korean and not Japanese!). But rather than chastise me for my ignorance, the ARMY were entirely forgiving, and kind, and sought to furnish me with information and answers about their beloved group.

More than just a pop group

I must say, I was bewildered by what I found out next – it turns out that BTS are a far more sophisticated pop group than the likes of, say, Take That or One Direction. BTS, and the art they produce, has more depth than an outsider like me could ever have imagined – each new project has a concept that follows a progression in time, telling the stories of each member and how they deal with issues that affect all young people; like self-worth, anxiety, love and general growing pains (I’ll add here at the request of many ARMY members, that these issues of course affect people of all ages). They create stories which link to their videos, featuring fantasy and sci-fi elements using various forms of symbolism and artistic devices such as dream sequences. The ARMY then try to figure out the hidden messages and meanings contained within these narratives, offering up different theories as to what each song and video is trying to convey. Each member (character) explores their own coming-of-age issues in the songs, with some songs offering multiple meanings, while others are open to the interpretation of the listeners; who are actively engaged in the production and composition of the tracks. (I’d like to just add here, that having read many kind and insightful responses to this piece from ARMY members, I am now aware of just what a diverse age and cultural range they have among their followers – from teenagers up to people in their 70/80s, which is quite remarkable).

I have to say, I was blown away a bit by the immense scale of what BTS are trying to do – I’d never come across a pop group with such a wide-ranging and diverse artistic project. The issues they deal with are clearly very important to their listeners and I think it’s admirable that their fans are (mostly I believe) out there trying to help each other deal with the difficulties of adolescence by sharing their thoughts and experiences in a positive way. While these guys are of course still regular pop stars who model clothes, star in reality TV shows and engage in other such pursuits you’d expect from seven young lads living the K-pop dream, they also reference philosophy and Korean culture and history in their lyrics. Plus, their latest Love Yourself Series project appears to be partly inspired by their work with UNICEF on an anti-violence campaign dealing with issues such bullying, domestic violence and sexual misconduct.

So I have to say thank you to the ARMY for their kindness – and for not getting upset or annoyed with me for not knowing anything about them or BTS. It was a real eye-opener and I can really appreciate now why they’re all so fervently passionate about the group. I hope you all enjoy the new album Love Yourself: Answer when it is released on 24 August – I will of course be giving it a listen.

I’ve since put together some of my own BTS covers and taken part in some fun ARMY projects. Take a look right here

Read more on my experiences with the BTS Army here

Read my review of Love Yourself Answer right here

Also, thanks to @EtoileLoba, @LoneCat3, @simmiryeon and @Carapheonix for providing me with the BTS information presented in this post.